The Wylie Boost gets its name from the guy who made the booster that inspired me to start building myself.  The Rangemaster that Wylie Gelber (bassist of the band Dawes) built in a repurposed enclosure with a vintage meter on top is used extensively by bandmate Taylor Goldsmith. 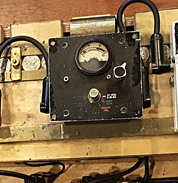 The combination of great great function and unique aesthetic is the epitome of what we strive for at Wrought Iron. So you can imagine how excited we were to get the go-ahead from Wylie to name this line after him!

So what's inside the Wylie Boost? Well, it's a Germanium transistor boost, (in the tradition of the original Rangemaster), but with my own circuit topology. Powered by the mysterious black "top-hat" germanium transistor, the Wylie incorporates additional controls for gain and tone along with overall volume.  To add a little vintage flavor, the circuit is built on turret board, similar to early hand-wired tube amps. But unlike a lot of early Germanium powered pedals, this one runs off a standard tip-negative power supply.

The Germanium transistor has a unique sound. It's a boost, but it is by no means clean---unless you want it to be. Due to the circuit's low input impedance, it is very responsive to guitar volume control. Rolling back the guitar volume will clean up the signal and add a little sparkle. The controls function as follows:

Volume controls the overall output of the signal. It is recommended to use the Boost with the volume at 12:00 or beyond for best sound quality.
Tone is a treble roll-off. Though the circuit is voiced to be a full range boost with emphasis on the mid range, you may want to roll off some highs when using single coils.
Gain is a unique control to this booster. this control slowly adds a bit of output, but it's main function is to add some grit. Rolling up the gain will allow a little more bass into the signal as well as adding some unique break-up.